​Embark on an extensive exploration of one of Africa's most beautiful nations on our Ethiopian Discovery Tour. Travel to awe-inspiring natural landmarks like the Blue Nile Falls, admire historic cities filled with fascinating UNESCO World Heritage Sites and spot wonderful wildlife in the Simien Mountains National Park. You'll get to soak up the country's rich local culture and meet some of the continent's friendliest communities, all while staying in accommodation with a truly authentic feel. 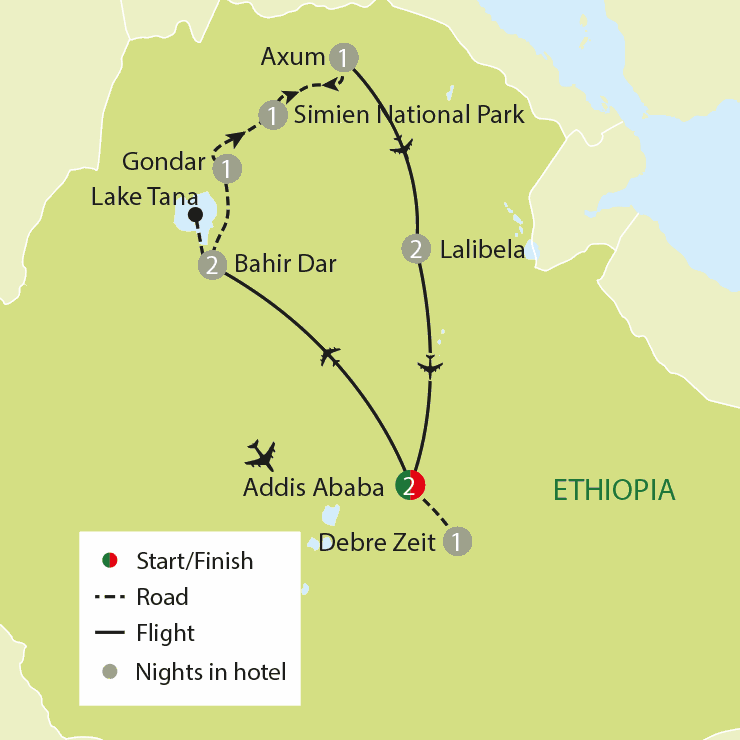 Book a Just You long haul trip and your very own private executive car will whisk you in comfort to and from the airport. For our European holidays, enjoy the same luxury for just £50.

Today, you'll depart the UK on your overnight flight to Addis Ababa.​

Arrive in the sprawling capital of Addis Ababa and transfer straight to your first hotel. You'll get to know your fellow travellers before tucking into a dinner of tasty traditional Ethiopian fare. ​

Soak up Ethiopia's vast capital city on a full-day tour. Meander through Addis Ababa's streets, stopping off at key sites such as the fascinating National Museum and the Ethnological Museum, which is set within Haile Selassie's splendid former palace.

​In the afternoon, we'll drive up to the Entoto Mountains fringing Addis Ababa to admire panoramic views of the city.

Transfer to the airport for your morning flight to Bahir Dar. After checking in at your hotel, we'll make our way to the majestic Blue Nile Falls. It is one of the greatest waterfalls in Africa, known locally by the poetic title 'Tis Abay', meaning 'smoking water'. Watch the water plunge 45 metres from the top before taking a walk around the falls, including crossing an ancient Portuguese bridge.

We'll then return to the hotel. ​

Today, you'll get to explore a handful of Lake Tana's mysterious island monasteries. Due to their remote location within the rainforest, they were left untouched for centuries and can only be found by a Local Guide.

​Take a boat across the lake to view several of these hidden gems of antiquity. Ura Kidane Mihret is the most famous of the lake monasteries and it's filled with intricate artwork and other treasures.

Today, we'll take a coach to our next hotel in Gondar. It is Ethiopia's historic capital, and its walled city of Fasil Ghebbi (also known as the Royal Enclosure) is a UNESCO World Heritage Site and the former seat of Ethiopian emperors.

​Spend the morning exploring Gondar's many allures, from the ruins of the 17th century Royal Enclosure to the nearby Fasilides' Bath. Later, we'll journey to Gondar's ornate Debre Berhan Selassie Church; its beautiful, brightly painted ceiling depicts the faces of over a hundred angels.

After breakfast, we'll drive to the Simien Mountains to spot gelada baboons and klipspringers. You may even catch sight of native Ethiopian species like endangered walia ibex, Menelik's bushbuck and Ethiopian wolves.

​The trip will include a stop at Sankaber to soak up impressive vistas of the mountains. Next, we'll head straight to our hotel, where we will have time to change before heading out to the campfire to enjoy some Azmari music this evening.

This morning, drive to Axum, an ancient city which was once the capital of Ethiopia's Aksumite Empire. Later this afternoon a Local Guide will give us a tour of its historic and archaeological highlights, including its iconic obelisks, the Queen of Sheba's palace and various royal tombs. We'll also visit the Church of Zion, which is thought to be the final resting place of the True Ark of the Covenant. Meals included: B,L,D
Next day

Today, we fly to magical Lalibela, which is famed for its unique cave churches cut into the surrounding mountains. The town itself is traditional, authentic and refreshingly free of souvenir shops, making your visit feel like a real step back in time.

​Lalibela's 11 extraordinary rock-hewn churches (many of which are UNESCO World Heritage Sites) are the main attraction, although the views of highland landscapes are also spectacular.

Continue your exploration of Lalibela with an excursion to cave churches. Built during the 12th century, they’re considered by many to be the eighth wonder of the world. The many highlights here include Bete Medhane Alem, the largest of the rock-hewn monasteries which is home to the sacred Lalibela Cross. You’ll then get to experience Lalibela’s local life by visiting a countryside home and learning how to make 'injera', Ethiopian sourdough flatbreads, and honey wine.​

Fly back to Addis Ababa and journey on to Debre Zeit. Also known as Bishoftu, the small town just over an hour from the capital, is surrounded by volcanic crater lakes and is a real haven for those after some peace and quiet. We'll be staying at the Kuriftu Resort and Spa for our final night and the rest of the day is yours to enjoy at your leisure. ​
Meals included: B,L,D
Next day

Enjoy a day at leisure at your hotel today, making the most of the facilities. After your evening meal we will transfer you to the airport for your late night flight back to the UK, arriving on day 13. Meals included: B,L,D
Next day

​You'll arrive back in the UK today.

​Please note: Mass tourism hasn't reached some areas of Ethiopia which means that some of the accommodation, in the more rural areas, is basic.