History, intrigue and legend accompany you on this fabulous Christmas break in the historical region of Transylvania, in the heart of Romania. You'll journey through forested landscapes and discover medieval towns and Transylvanian castles, where you'll hear tales of vampires as you explore. Pick up traditional souvenirs amongst atmospheric festive markets and enjoy Christmas lunch in a very special location in the grounds of 'Dracula's Castle'. 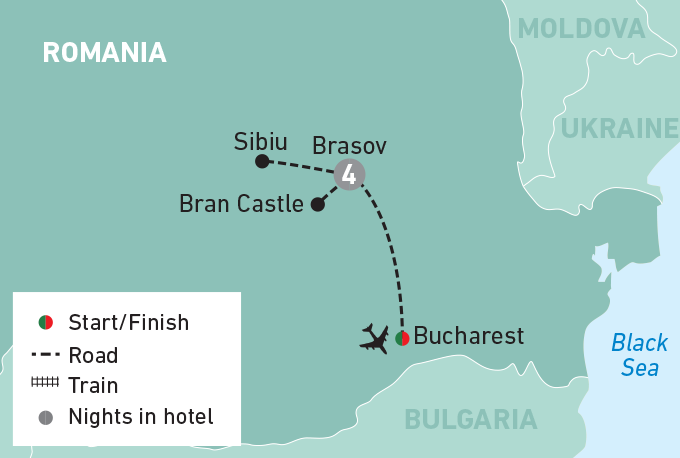 Book a Just You long haul trip and your very own private executive car will whisk you in comfort to and from the airport.

​Today you'll depart on your flight to Bucharest. We'll then transfer you to your hotel in the historic town of Brașov, in the heart of Transylvania. Get to know your fellow travellers over a welcome drink and dinner in a restaurant this evening. ​

After a leisurely morning, we'll head out to discover the highlights of Brasov, a town founded in 1211 by the Teutonic Knights. In the heart of the city, Council Square is where we'll find the delightful Christmas market. Browse the many stalls for traditional delicacies and handmade decorations, or perhaps treat yourself to a warming glass of mulled wine. Our walking tour will then take in the historic Black Church, which got its name after it was burned during a huge fire in 1689. This is the greatest Gothic church in Transylvania and inside there is a remarkable collection of carpets from Asia Minor. We'll also peer down Rope Street - Europe's narrowest street is little more than the width of one person.

It's Christmas Day, so join your fellow travellers for a leisurely breakfast before we head out on an included excursion. We're going to visit Bran Castle, which is nestled in dense forest. Surrounded by legend and mystery, it is also known as Dracula's Castle, and is one of the locations linked to the fictional vampire created by Bram Stoker. Built in the 14th century, it actually doubled as an administrative building until it was gifted to Queen Marie of Romania in 1920.
​We'll then enjoy a delicious Christmas lunch in the 'Tea House of Queen Mary' in the castle's grounds. This building is where Queen Marie of Romania would receive guests who visited the castle.

We're going to set off on a day of exploration in Sibiu, a walled citadel built in the 12th century by German settlers. Highlights include Great Square, Little Square, St Mary's Evangelical Church, a Gothic masterpiece with a huge steeple, and the Bridge of Lies. Soak up the medieval atmosphere on a walk around the pedestrian-friendly Upper and Lower Towns, connected by the Stairs Passage. We'll stroll narrow cobbled streets lined with colourful houses to the Christmas market in Grand Square, first held in 2007, when Sibiu was named European Capital of Culture, along with Luxembourg.
This evening we'll head to a restaurant in the ski resort of Poiana Braș​ov, where dinner will be accompanied by traditional folk music and free-flowing wine.

Today we will transfer you to the airport for your flight back to the UK.
Meals included: B

Located in Brasov the hotel Coroana Brasovului is 1km from the old town centre. The charming hotel has a restaurant, patio and English bar. Rooms feature flat screen TV, free wi-fi, minibar and and bathroom with showers.