Warm hospitality, welcome bursts of year-round sunshine and intriguing historic sights are yours to discover on this wonderful Christmas holiday. From the comfort of your 4-star hotel, enjoy included visits to fascinating museums, ancient monasteries and picturesque castles. You can also opt to discover the capital of Cyprus, Nicosia, and step off the tourist track in the traditional town of Guzelyurt. 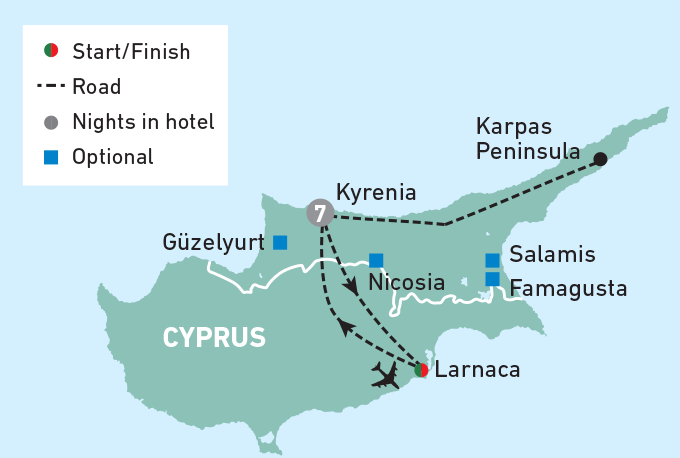 Today, you will fly to Larnaca, and on arrival we'll transfer you to your hotel in the beautiful town of Kyrenia.
Settle into your room before meeting your travelling companions over a drink and dinner this evening.

​We'll enjoy a day of exploration, starting with a tour of Kyrenia's Old Town, which is steeped in history and is home to a picturesque harbour overlooked by Kyrenia Castle. Our first stop is the fascinating Shipwreck Museum of Kyrenia, which is housed inside the castle. Here we'll view one of the oldest trade ships in the world whose remains were only discovered in the 1960s after the vessel had lain on the seabed for more than 2,000 years.
Next we'll visit the Lusignan Dungeon, the Joanna L'Alema's Prison and the Neolithic Age Museum. We'll then have some free time, so you can take lunch if you wish, or simply stroll around the town's horse-shoe shaped Venetian harbour, one of the prettiest in the Mediterranean.
Before we return to the hotel, we'll see the Gothic arches and towering stone walls of the Bellapais Monastery, located high up in the Five Finger Mountains. We'll also see the house of the expatriate poet, novelist, dramatist and travel writer Lawrence Durrell, which is close by.​

​Our included excursion today takes us on a scenic drive through the countryside and traditional villages of the Karpas Peninsula. Running parallel to Cyprus' north coast, we'll view the Five Finger Mountain before we stop for lunch in a restaurant. The beaches around here are lovely, so maybe enjoy a stroll after you've eaten.

​Today is free for you to spend as you wish. You can relax at your hotel or explore Kyrenia further in the company of your travelling companions.
If you'd like to see more of Northern Cyprus, why not come with us on an optional excursion to its capital, Nicosia, which is split in two by the 'Green Line' dividing the Turkish and Greek Cypriot communities.
The Old Town is a combination of 16th century walls, cafés and squares. The city is also a great place to indulge in some shopping. ​

​You can spend today as you wish, perhaps take advantage of your hotel's facilities or take a walk into Kyrenia. You'll want to return to the hotel in plenty of time to get ready for this evening's festivities when we gather together for dinner and live entertainment.

It's Christmas Day, which you can spend relaxing at your hotel, or maybe you'll choose to join an optional excursion. We'll head off the tourist trail and take a walking tour of the traditional market town of Guzelyurt, which is famed for its fertile land and its abundance of citrus groves. It's also home to the Church of St Mamas, the patron saint of tax avoiders!

​If you choose to join our optional excursion today we're heading out for a full day of exploration, starting with visits to St Barnabas Monastery, which is home to one of the best archaeological museums in Cyprus, and the Church of St Barnabas. We'll then continue to the ancient city of Salamis, the capital of the island as far back as 1100 BC, for a tour of the ruins.
We'll stop for lunch in a typical Cypriot restaurant, and this afternoon we'll set our sights on Famagusta, which is surrounded by ancient walls. On a tour here we'll see St Nicholas Cathedral, the Venetian Palace and the Dungeon of Namik Kemal, a Turkish writer who was imprisoned here by the Ottoman government for more than three years in 1873.

Today we will transfer to Larnaca airport for our flight back home to the UK.

Your hotel occupies a lovely spot about a 20 minute walk from Kyrenia’s historic harbour and a wide range of shops, restaurants and bars. This family run hotel is located only 3 miles away from its nearest beach and is set amid spacious, tranquil gardens.

Other hotel facilities include a choice of restaurants, bar, two swimming pools and swim-up bar (outdoor pools and swim-up bar open in summer only), casino and free WiFi in public areas. The Terrace is open during the summer season where you can enjoy breakfast and dinner with beautiful views of the garden. The garden bar has a tranquil setting, so why not enjoy a drink at night under the stars. 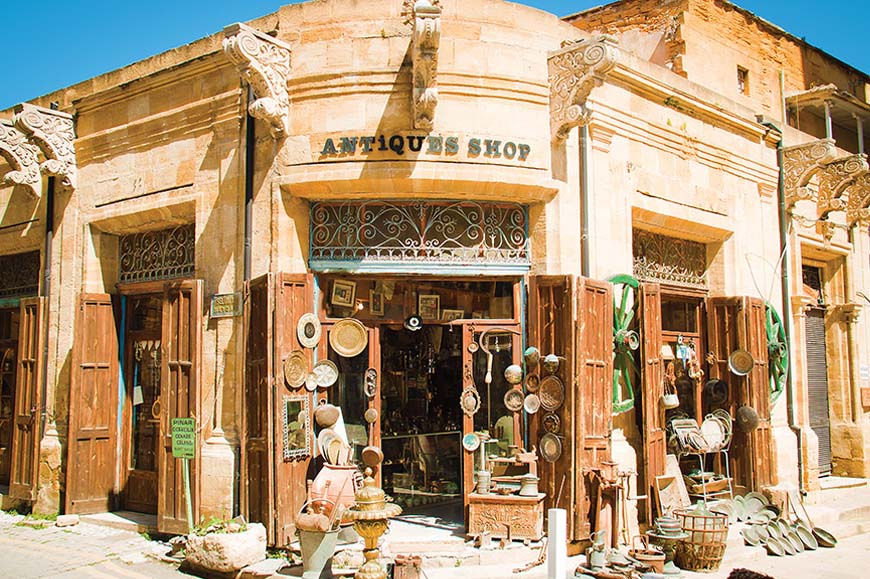 A full day visit to the capital city of Cyprus, Nicosia, split in two by the ‘Green Line’ which divides the Turkish and Greek Cypriot communities. The old town is a picturesque combination of 16th century walls, pavement cafes and charming squares. You’ll have free time to explore and indulge in some shopping as well as crossing the border into Southern Cyprus. (Please note you will require your passport today in order to cross the border). Lunch is included.

A full day visit to the capital city of Cyprus, Nicosia, split in two by the ‘Green Line’ which divides the Turkish and Greek Cypriot communities. The old town is a picturesque co... 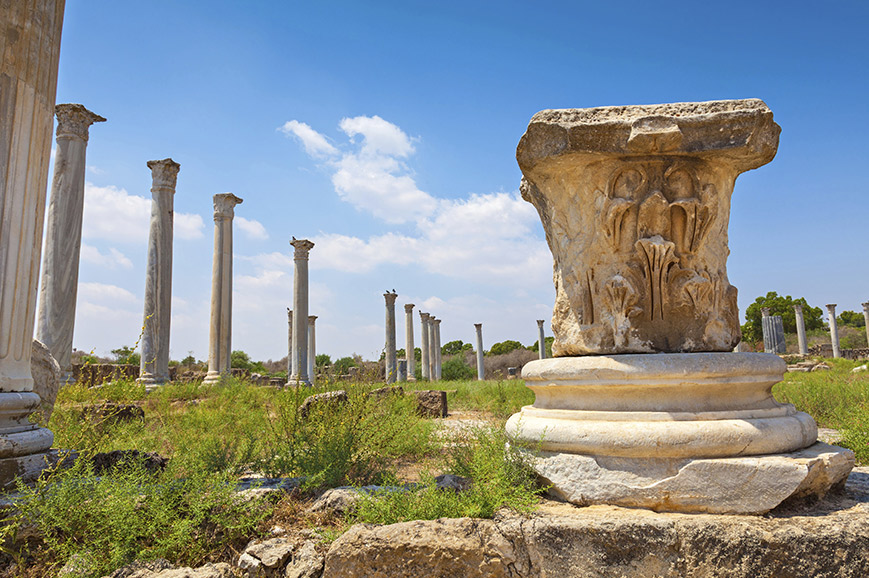 Famagusta and Salamis with included lunch

Salamis City is home to a treasure trove of ruins, including a gymnasium with elegant colonnades and impressive statues, the Roman bath house which still displays traces of its original mosaics, and a fine Roman amphitheatre which has been restored to 18 rows high of its original 50 rows which would accommodate over 15,000 people who came to watch plays and performances. St Barnabas Monastery has a wonderful array of icons to visit. After an included lunch we visit the medieval walled town of Famagusta with a drive around the perimeter of the ruined, deserted 'Ghost Town' where buildings still lie empty, dating back to the troubles in Cyprus. Included is a visit to the 14th century St Nicholas Cathedral and free time to have a wander around the town of Famagusta.

Salamis City is home to a treasure trove of ruins, including a gymnasium with elegant colonnades and impressive statues, the Roman bath house which still displays traces of its ori... 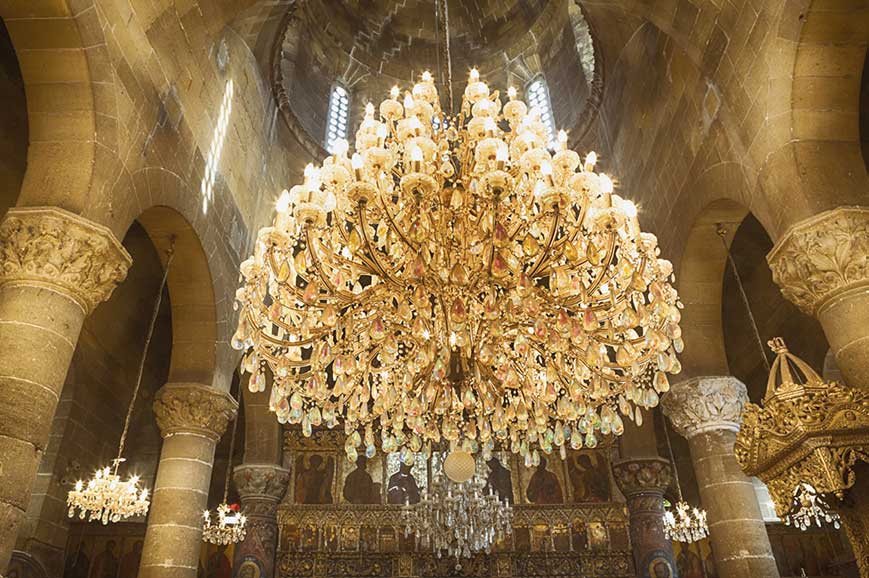 Explore the west coast on today’s half day tour. Our excursion begins as we journey to see the beautiful St Mama’s monastery which dates back to the 15th century and is now an iconic museum. Continue on to Guzelyurt’s Archeological Museum which hosts exhibits including the Golden Leaves of Soli before journeying to the antique sites of the Soli ruins and the ruins of Vouni Palace.

Explore the west coast on today’s half day tour. Our excursion begins as we journey to see the beautiful St Mama’s monastery which dates back to the 15th century and is now an icon...

From
£30
Add at checkout