​​As you travel along America's east coast, from Boston to Washington DC, you'll make amazing discoveries and enjoy exciting experiences as the history of the USA is brought to life. You'll follow the famous Freedom Trail in Boston, step back ​in time at the Plimouth Plantation and visit Mystic Seaport before arriving in New York. A three-night stay gives you plenty of time to discover the city's sights before you move on to Philadelphia, the USA's original capital. Next, you'll visit America's oldest Amish settlement in Lancaster County, then head to Washington DC for a tour​ of its iconic landmarks and monuments. 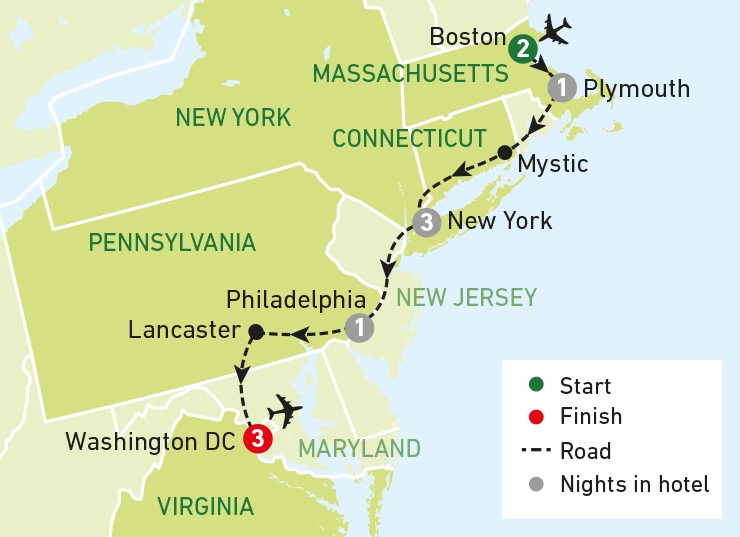 ​Depart on your flight to Boston. On arrival, we will transfer you to your hotel for a two-night stay.

​​Boston is one of the east coast's finest cities. Once a hotbed of revolutionary activity and known for the Boston Tea Party – a protest against tax on tea – it's now a cosmopolitan city that proudly showcases its historic past. An included tour takes you along parts of the famous Freedom Trail to the Granary Burial Ground, Beacon Hill and Quincy Market. The rest of the day is yours to explore the city at leisure.

A quintessential New England town, Plymouth is where America's founding fathers first set foot in the New World in 1620. We'll step back in time at Plimoth Plantation, a living museum that tells the story of these early settlers from England. ​

​​Our tour continues today as we head to Mystic in Connecticut, the most southern state of New England. Here, we include a visit to Mystic Seaport, a fascinating maritime museum that features a replica 19th century coastal village, a working shipyard and more than 500 historic vessels. We'll then continue to New York where we'll stay for three nights. On arrival enjoy a tour with a Local Guide who will introduce you to sights such as the Empire State Building, Wall Street, Broadway, the One World Trade Center, Chinatown and Times Square.

Today, join a sightseeing cruise around Manhattan. From the water, you'll see famous landmarks such as the Statue of Liberty, the UN Headquarters, and Yankee Stadium, as our cruise takes us under the Brooklyn and Manhattan Bridges.​ During an evening at leisure, why not catch a Broadway Show with your fellow travellers.

​There's time today to make your own discoveries in this exciting city.
If you'd rather join an optional excursion, your Tour Manager will take you to Midtown Manhattan, on a great morning out which starts with a stroll to the Rockerfeller Center. Here, you'll head up to the Top of the Rock Observation Deck to take in wonderful views of the city. From here you'll see Central Park to the north, and if you look south you'll see the Empire State Building and all the way down to lower Manhattan. We're just a few blocks away from the southern section of Central Park, and a horse-and-carriage ride, also included in this optional excursion, will give you a well-deserved rest.
After you've bid your horse and driver farewell, why not join your Tour Manager and your travelling companions on a walk down Fifth Avenue, dipping into the famous stores lining it.

Depart New York for the USA's original capital, Philadelphia, a liberal melting pot of people and cultures. It's here that the Declaration of Independence was written, signed and introduced in 1776. On arrival, our tour will show you the city's highlights. The 'most historic square mile in the United States' features the Liberty Bell, Independence Hall, Congress Hall and Christ Church, where George Washington and Benjamin Franklin once worshipped. Admire the city's tallest building, the Comcast Center and stroll along Benjamin Franklin Parkway, where there are many museums including the renowned Franklin Institute, the Rodin Museum and the Philadelphia Museum of Art.

Our tour continues today as we head to Lancaster County. Less than three hours' drive from the heart of the American government, we'll discover America's oldest Amish settlement. On a tour of the Dutch Country this morning, we'll meet the people who live a centuries-old 'Plain' lifestyle and see how windmills are used to harness the power of nature. Here, the horse and buggy is the primary form of transport. Perhaps take a ride in one before we head to Washington DC.​

Today we'll discover the highlights of Washington DC on a guided tour. Iconic sights lining the National Mall to the Capitol Building include the Lincoln Memorial and the Washington Monument, and of course, we'll make a stop at the White House. There is so much to see and do in Washington DC, so we've left this afternoon free for you to explore independently or in the company of your travelling companions. The Smithsonian is a collection of 19 world-class museums – all are free to enter, and most are located around the mall. ​

You have a free day to explore more of DC today in the company of your fellow travellers. In addition to the free Smithsonian Institute sites, there are many other attractions including the Newseum, an interactive museum dedicated to journalism.
If you'd like to discover more, an optional excursion gives you the chance to explore the areas around DC. Your first stop will be at the Arlington National Cemetery, where you'll see famous gravesites including that of the Kennedys. We will then make our way to Old Town Alexandria to see wonderfully preserved buildings from the 18th and 19th centuries. This historic district also boasts a thriving arts scene, and if you head to King Street you can stop for lunch in one of the restaurants if you wish. We'll then set sail on a sightseeing cruise along the Potomac River, passing famous landmarks including the Pentagon.
Your tour comes to an end in the historic neighbourhood of Georgetown, where we'll discover beautiful tree-lined cobbled streets and some of DC's best shops and restaurants. You can travel back to the hotel with your Tour Manager or choose to spend more time here making your own discoveries. A great place for a stroll is Waterfront Park, which stretches for miles along the banks of the river, or you could perhaps walk through the university's leafy campus.

​Today we will transfer you to the airport for your return flight to the UK.

​You'll arrive back in the UK today.

Please note: We want you to get the most from your holiday with us, please be advised this tour requires a good degree of physical fitness and is not suitable for anyone with limited mobility.
​

Hotel 1620 is located across the street from historic Plymouth Harbour and Village Landing Marketplace Shopping Centre. The Mayflower II and Plimoth Plantation are also nearby. Hotel rooms feature free Wi-Fi, flat-screen TVs and coffeemakers. Other hotel facilities include an indoor heating swimming pool and a fitness centre.
Next accommodation

The New York Marriott East Side is located just 700 yards from the famous Rockefeller Center. The hotel itself has a fitness centre, bar and restaurant, plus free Wi-Fi. Guest rooms benefit from en-suite, TV, tea and coffee maker, hair dryer, air-conditioning and mini fridge
Next accommodation

The 4-star Hampton Inn Center City is situated in downtown Philadelphia. Hotel facilities include a restaurant, bar, gym and a swimming pool. Bedrooms have private facilities, complimentary Wi-Fi, tea/coffee-making facilities and a TV.
Next accommodation

The Fairfax at Embassy Row

Housed in a stately 1927 building, this luxury hotel is a 3-minute walk from the Dupont Circle Metro station and 1 mile from The White House. The rooms feature Georgian-style decor, flat-screen TVs and iPod docks. Property features include fitness centre. Dining options include an elegant lounge with fireplaces and a classic American restaurant.