​The beautiful city of Tromsø has an intriguing history and culture as well as being one of the best places to see the elusive Northern Lights. You'll also enjoy a thrilling husky-driven sled ride and experience traditional Norwegian life on this fabulous holiday. 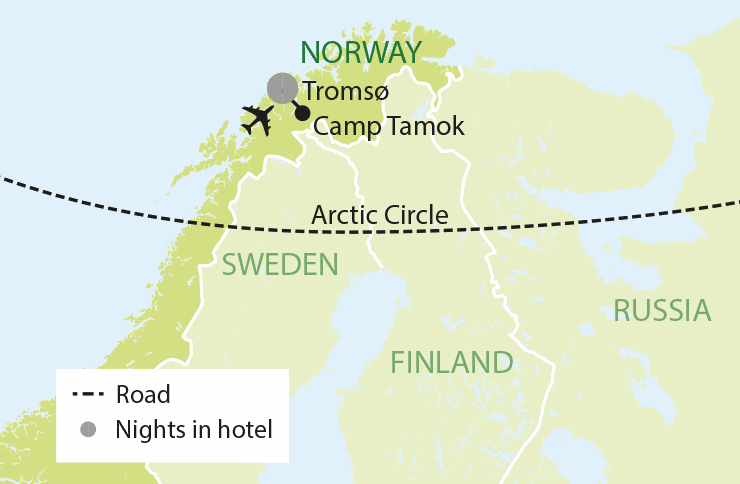 Book a Just You European trip and for just £50, your very own private executive car will whisk you in comfort to and from the airport.

You'll fly directly to Tromsø today. Get to know your travelling companions over a welcome drink and dinner.​

​Tromsø is surrounded by blue fjords and majestic mountains. It is at the heart of the Northern Lights zone, making it one of the best places in the world to view this natural phenomenon. We'll introduce you to some of its highlights on a half-day tour.

Our first stop is the Polaria Museum, where we'll be introduced to Arctic marine life through a series of fascinating films and exhibitions. Perhaps the crowning glory of the museum is the huge aquarium, where you can see an array of creatures that thrive in the waters of Arctic regions. You will also have the chance to come face-to-face with the seals and walruses that are native to Norwegian waters.

Tromsø's centrepiece is the spectacular Arctic Cathedral, a stark white triangular structure which rises high into the sky. Its angular form and sparkling exterior fittingly resemble an iceberg, and we'll see this too before heading to the Tromsø Museum. Here, we'll find out about the Norwegian culture, in particular the Sami people, and also discover more about the Northern Lights.​

​Set deep in the Norwegian wilderness, Tromsø ​Villmarkssenter offers a superb opportunity to experience the traditional aspects of Norwegian life. A thrilling husky-driven sled ride through snow-covered landscapes is an ideal way to get acquainted with Norway's memorable great outdoors. A cold-weather suit and boots will keep you toasty warm as you zip through the landscape​.

Today has been left free for you to spend as you please. This evening, we'll journey by road to Camp Tamok, where we'll head off on foot in search of the Northern Lights. It's a great spot in which to capture a sight of this incredible natural phenomenon, also known as the Aurora Borealis. Before we head off, we'll enjoy a three-course dinner with wine or beer included as we cosy up to a roaring open fire in a Sami tent. ​

You'll transfer to the air​port for your return flight to the UK, via Oslo.

The 3-star Thon Hotel in Tromso is located right in the heart of the city, close to its many attractions. Head to the lobby where you will find complimentary coffee.