​This all-encompassing tour of New Zealand starts in the beautiful city of Auckland on North Island. Discover emerald-green landscapes, thermal springs and geysers in Rotorua and Napier, then spend some time in the capital Wellington, before sailing across the Cook Strait to South Island. Snow-capped mountains, shimmering glaciers and beautiful Milford Sound await and there's also time to explore Queenstown and the vibrant city of Christchurch. 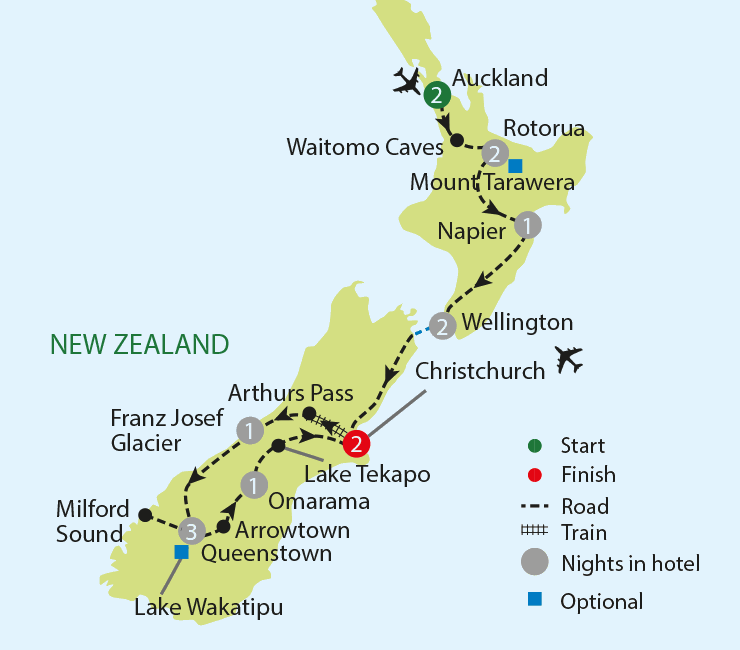 Today you'll depart on your flight to New Zealand via Singapore, arriving on the morning of day 3.​

​We'll arrive in Auckland today. There is time to rest after your flight before we gather as a group for dinner.

​The beautiful city of Auckland is the largest in New Zealand, situated on the North Island in the Hauraki Gulf. We'll admire its spectacular skyline on an included tour this morning, which takes us to all the must-see sights. Later, you will have time to explore the city further in the company of your fellow travellers.​

The warm, emerald-green North Island was shaped by volcanic activity, and evidence of this remains in the thermal springs surrounding Rotorua. En-route we will journey through the dairy-rich Waikato farming region, home of the Maori kingdom, and visit the world-famous Waitomo Caves. The amazing glow-worm grotto is a fascinating sight and we will explore in the company of a Local Guide.
You can also take an optional flight today, either by float-plane or helicopter, over Mount Tarawera Volcano. You'll learn how the volcano's 1886 eruption - the largest in New Zealand's living memory - affected the landscape and, if you chose the helicopter flight, you will actually land at the site of the eruption. Those choosing the float-plane excursion will have the added excitement of taking off and landing on water at the Rotorua City Lakefront.

​Today you have the option to join a tour of Hobbiton, the location created for the Lord of the Rings and the Hobbit films. We'll explore the site, which includes hobbit holes and the Green Dragon Inn, while our guide offers fascinating insight – a must for fans of the films. Alternatively, join us for an optional excursion to Rainbow Springs, where you can catch a glimpse of the rare, flightless kiwi bird, take a ride on a gondola and enjoy a taste of regional wines. Tonight, you'll have a chance to experience a Maori concert and sample an authentic Hangi meal on an optional tour. This is where your food is cooked by steam underground using a centuries-old method that harnesses the power of nature.​

​Te Puia Thermal Reserve is home to the extraordinary boiling mud pools and spouting geysers that New Zealand is so famous for. We will call here this morning to see this spectacular sight for ourselves. The route to Napier takes us through the Wairakei Valley, past the spectacular Huka Falls to beautiful Lake Taupo, New Zealand's largest freshwater lake. We will pause here to take in the mesmerising views.
Napier is home to one of the finest collections of Art Deco-style buildings in the world and has the ideal climate for growing grapes. Sampling some of the locally cultivated wines is certain to be a treat before we discover more about the town as we explore on foot in the company of our Tour Manager. We'll enjoy a group dinner this evening at a winery estate.​

​Wellington, New Zealand's wonderful capital, enjoys a beautiful setting on the southern tip of the North Island. We'll head here today with an orientation tour on arrival to highlight the city's main sights.

​We have left today free for you to explore the city with your travelling companions. Perhaps take the cable car to the Botanical Gardens or visit the Te Papa Museum, which offers a wealth of information about New Zealand and its history, along with a collection of art.

​We set sail for the South Island today. Once back on land, we continue the drive to Christchurch, often referred to as the most English city outside of England. We'll enjoy the stunning scenery of the Kaikoura coast along the way​.

​The TranzAlpine offers a spectacular journey into the Southern Alps. We'll be on board the train from Christchurch to Arthur's Pass, the South Island's highest railway station, passing through the contrasting scenery of the snow-capped Southern Alps and majestic gorges. At Arthur's Pass we rejoin our coach and continue south to the magnificent scenery and glaciers of the Franz Josef and Fox Glacier regions. Perhaps join a helicopter flight with a landing on the glacier for another view of this stunning landscape.​

The road through Westland National Park is one of the most scenic ever built, with tremendous ocean views to one side and spectacular forest views to the other. Experience it for yourself as we head to Queenstown, a popular resort in both summer and winter, travelling south crossing the Haast River Bridge and passing Lake Hāwea and Lake Wanaka along the way.
If you're looking for an adrenaline rush, why not take an optional ride on the Kawarau Jet Boat. On this thrilling adventure you will travel at speeds of up to 50 miles an hour in very shallow water.
Later on, you may wish to join us for an optional ride on the Skyline Queenstown Gondola. We'll travel 450 metres above Queenstown and Lake Wakatipu to the top of Bob's Peak for fabulous views of the night sky and an incredible stargazing experience. A delicious dinner in the restaurant at the top of the gondola rounds off a wonderful evening.

​Milford Sound is widely regarded as one of the most beautiful locations in New Zealand. Te Anau is the gateway to Fjordland National Park and our first port of call on today's tour. We continue through the lush beech forests of the Eglinton Valley and the eroded glacial canyons of the Hollyford Valley, before arriving at Milford Sound itself. A cruise on the Sound, which we include weather permitting, is a great way to appreciate the beauty of the area, and lunch is also included.​

Explore Queenstown in the company of your fellow travellers or perhaps join us on an optional excursion.
If you're feeling adventurous, there's a fantastic opportunity to take an exhilarating jet boat ride on the Dart River. You'll also enjoy a walk through the bush and go on an exciting four-wheel drive.
This evening, if you wish, you could enjoy a relaxing steamship cruise on Lake Wakatipu and a gourmet barbecue dinner in the Colonel's Homestead at Walter Peak.

Today we travel via the gold-mining town of Arrowtown. New Zealand's spectacular scenery is never-ending and another stunning route delivers us to the Mount Cook region today. If you wish you can take an optional scenic flight over some of New Zealand's highest mountains and largest glaciers. Your pilot will provide interesting commentary as you admire them from the air.

​A lovely drive this morning takes us across Burkes Pass and onwards to Lake Tekapo. We will travel over the Canterbury Plains and on to Christchurch, where an orientation tour introduces us to all the main sights. This evening we will gather with the group to enjoy a farewell drink.​

​We'll transfer to the airport for our flight back to the UK.​

You'll arrive back in the UK today.

Grand Millennium Auckland is located in the city centre short walk away from Sky Tower and with many options of dining, shopping and entertainment at the doorstep. Modern hotel rooms feature free Wi-Fi, flat-screen TVs and tea/coffee-making facilities. Other hotel amenities include an indoor heated swimming pool, a gym with two saunas and various dining options, including a Japanese restaurant.
Next accommodation

Sudima Hotel Lake Rotorua is set on the shores of the lake and close to Rotorua's vibrant city centre.

You will stay at the Scenic Hotel Te Pania perfectly located on the edge of Hawkes Bay. Hotel facilities include a restaurant and bar. Bedrooms have private facilities, TV, hairdryer and tea/coffee-making facilities.
Next accommodation

The Park Hotel Lambton Quay is situated in the heart of Wellington. Hotel amenities include a restaurant, bar & fitness centre. Rooms are furnished with free Wi-Fi, TV, tea & coffee-making facilities and a hairdryer.
Next accommodation

Quality Hotel Elms is located in the Papanui area of Christchurch, with bars and restaurants in the local vicinity. The city centre is within easy reach. Hotel rooms feature free Wi-Fi, flat-screen TVs, minifridges and tea/coffee-making facilities.
Next accommodation

Scenic Franz Josef Hotel is located close to one of New Zealand's most spectacular natural attractions, the Franz Josef Glacier.

Holiday Inn Queenstown Frankton Road has a peaceful setting amongst alpine scenery and picturesque lakes, yet it is conveniently close to the city.

Hotel facilities include a restaurant and bar. Bedrooms have private facilities, TV, iron, refrigerator, tea/coffee-maker and hairdryer.
Next accommodation

Quality Hotel Elms is located in the Papanui area of Christchurch, with bars and restaurants in the local vicinity. The city centre is within easy reach. Hotel rooms feature free Wi-Fi, flat-screen TVs, minifridges and tea/coffee-making facilities.