For lovers of history, literature and magnificent historical palaces – this trip has it all! Oxford known as The City of Dreaming Spires is famous the world over for its outstanding University and place in history. For over 800 years, it has been a home to royalty and scholars. Explore the streets hundreds of scholars have tread over the years. Visits to Shakespeare's Stratford upon Avon and the UNESCO World Heritage Blenheim Palace birthplace of Churchill are also included in this short break. 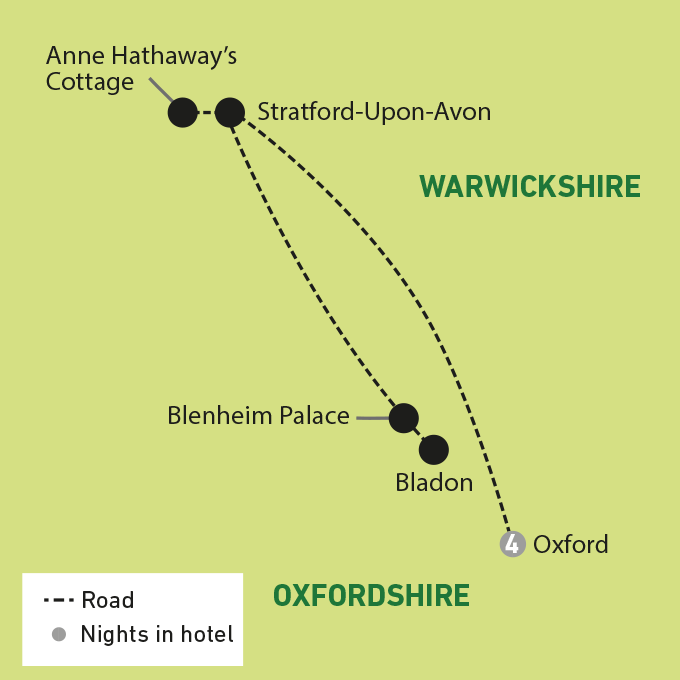 Make your own way to the Voco Oxford Thames Hotel. In the evening enjoy a Welcome Drink with your travel companions and Tour Manager in the bar area of your hotel before a delicious dinner.  Meals included: D
Next day

After breakfast, we depart on a full day excursion to Oxford. Oxford University, founded in 1214, is the oldest and one of the most well-known universities in Britain. Over 30 individual colleges make up the university that spreads across the city, and each has become affiliated to the central university at different points in time from the 13th century up to the present day. Oxford has numerous tourist attractions including the iconic Bodleian Library and Radcliffe Camera at Oxford University and the historic Covered Market with its many tourist shops. See the sights on a walking tour with a Blue Badge Guide including familiar sights used as the backdrop to many TV programmes and films, from Inspector Morse to Harry Potter. In your free time consider visiting the first-ever public museum - the Ashmolean where you can discover ancient Greek and Roman statues, Egyptian mummies and Lawrence of Arabia's robes. In the early afternoon enjoy High Tea at the Folly. Return to your hotel in the evening and have a relaxed dinner.

This morning after a hearty breakfast, indulge your love of theatre and poetry this morning as we travel to romantic Stratford-upon-Avon, made famous by its favourite son, William Shakespeare, whose extraordinary works have been admired by audiences for over 500 years. View Anne Hathaway's thatched cottage and visit Shakespeare's Birthplace and Visitor Centre for insights into the life of the 'Bard of Avon', before exploring the charming cobblestone streets of his hometown. This evening enjoy dinner with your travel companions at the hotel.

This morning after breakfast we will take you to Blenheim Palace for a visit including the Palace and the magnificent Gardens. Home to the 12th Duke of Marlborough and his family and the birthplace of Sir Winston Churchill, Blenheim Palace is a UNESCO World Heritage Site boasting a long and diverse history. Take a tour through the Palace State Rooms. Once you have toured the palace visit the formal gardens and then enjoy one of the many walks on offer. Later stop at St. Martin's Church in Bladon to see where Sir Winston Churchill is buried. Travel back to your hotel and meet with your fellow travel companions for dinner at the hotel.

This morning, after a leisurely breakfast, say farewell to your travel companions and Tour Manager as you return home after your short break to Oxford.  Meals included: B

Situated on the banks of the River Thames, enjoy a slice of the Oxfordshire countryside at this lovely hotel. Warm inviting rooms ensure a comfortable stay with tea and coffee making facilities available.