Canada & New England in the Fall with Boston Add-on

This tour will show you the ever-changing colours and hues of Canada and New England at its autumnal best. Soak up the sights of Toronto, and view the cascading, thundering waters of the mighty Niagara Falls. Following the Maple Leaf Trail, we'll pass fairy-tale castles, lighthouses and of course the magnificent fall foliage. Next, it’s on to French-speaking Quebec, and its capital, Quebec City, the oldest city in Canada. From here, we'll cross into the USA, and meander down the Kancamagus Highway, viewing some of the best fall foliage in the USA as we travel. Finally, we end our journey with an extended stay in Boston, one of America's most historically rich cities. 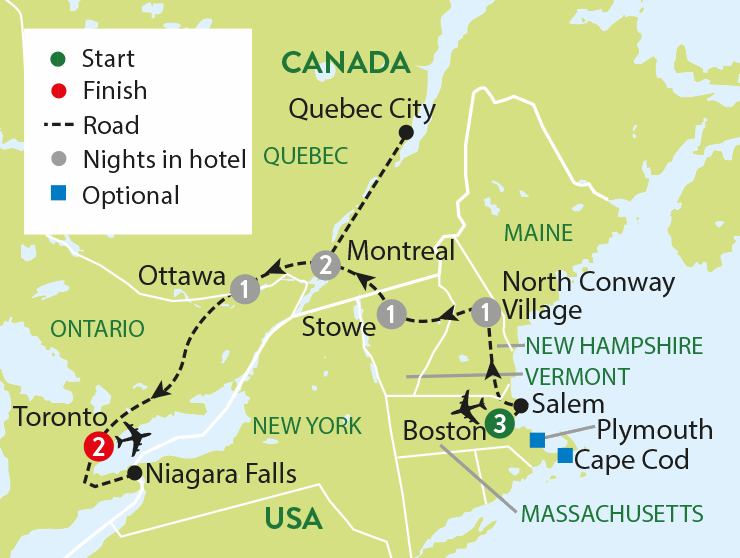 Make your own way to the airport for your flight to Toronto and on arrival we will transfer you to your hotel.

​Toronto is Canada's largest city and one of the world's most culturally diverse. Here you'll find high-profile businesses, superb museums and galleries, countless high-end restaurants, sophisticated bars and a commercial centre dominated by the 1,815ft high CN Tower, the world's tallest freestanding structure. Discover the city on an included tour before gathering with your travelling companions for a welcome dinner.​

The mighty Niagara Falls is one of the greatest sights in the New World. For the most dramatic view, take a thrilling optional helicopter flight over the thundering waters. Niagara-on-the-Lake is a picturesque town often referred to as the loveliest town in Ontario, and we'll stop here on the way back to our hotel.

Following the Maple Leaf Trail we'll witness spectacular scenery as we pass along the Thousand Islands Parkway en route to Ottawa. We'll pause at Rockport for an included cruise around the Thousand Islands, where we'll see fairytale castles, lighthouses and mansions. Ottawa is Canada's elegant and historic capital city. Situated on the banks of the Rideau Canal, its skyline is crowned by the magnificent Parliament Buildings and the grand Chateau Laurier hotel. An included tour will take us to highlights including Parliament Hill, the National War Memorial, Confederation Square, the Tomb of the Unknown Soldier and ByWard Market, where you'll find some of the city's best pubs and restaurants.

Canada's second city, Montreal in the French-speaking region of Quebec, sits on an island at the junction of the St Lawrence and Ottawa rivers. On arrival, our half-day tour will take in Mount Royal, the three-peaked hill which gives the city its name, the historic district of Old Montreal, with its cobbled streets and 17th century buildings, the beautiful Notre Dame Cathedral and the St Lawrence Seaway – a series of locks, canals and channels along the river that allows ships to pass from the Atlantic Ocean to the Great Lakes. Tonight we'll taste French Canadian flavours at a bistro in down town Montreal.

Quebec City is the only walled city in North America. Standing on the St Lawrence River, it is a metropolis of winding cobbled streets, ancient churches, Norman-style houses, stone buildings, public squares and horsedrawn calèches. We include a tour, taking in famous sights including the Cathedral, Château Frontenac, the Basilica, and the Plains of Abraham – the scene of the decisive battle in 1759 between the French and the English for control of Canada.

Leaving Montreal we'll cross the border into the USA. Our drive takes us through Vermont's gentle countryside for our first glimpse of New England's famous fall colours. The smallest state capital in the USA, Montpellier is home to Morse Maple Farm. A visit gives us the chance to see how this sticky syrup is produced. We'll continue to North Conway in New Hampshire for a two night stay.

From our base in North Conway we'll explore New Hampshire, visiting Franconia Notch State Park, located in the heart of the stunning White Mountain National Forest.

​The Kancamagus Highway is a scenic 34-mile stretch of road that's one of the best fall foliage viewing areas in the USA. On our leisurely drive to Boston we'll head through the White Mountain National Forest where our reward will be spectacular views of the White Mountains, the Swift River, Sabbaday Falls and, of course, the kaleidoscope of colour that epitomises New England in the fall. On arrival we tour Boston with a local expert guide, we will follow parts of the famous Freedom Trail and visit the Granary Burial ground. We also visit Beacon Hill, Quincy Market and Cambridge - home of Harvard University,​

​The principal city of New England, Boston boasts a charming old quarter, where steep cobbled streets contrast delightfully with the city's modern skyscrapers. Located at the easternmost point of Massachusetts is beautiful Cape Cod. Why not join us on an optional tour here today, which also includes a visit to Plymouth, where America's founding fathers first set foot in the New World. This evening, gather with your travelling companions for a farewell drink.​

At one time, Boston was a hotbed of revolutionary activity, perhaps the most famous act being the Boston Tea Party. These days, it's a modern, cosmopolitan city that takes pride in its revolutionary past, preserving it for future generations. The narrow, winding streets and squares of the old quarter provide an abrupt and delightful contrast with the city's modern skyscrapers and bustling lifestyle. Boston also boasts perhaps the finest seafood in the world. The remainder of your stay in Boston is at your leisure, so you may wish to relax or explore Boston further.​

Transfer to the airport for your return flight to the UK.  Please note that the airport transfer is not included, however, you can easily arrange a transfer at the hotels front desk.​

Arrive back in the UK.

Set in downtown Toronto your hotel facilities include a restaurant and a 24 hour fitness centre. Bedrooms have private facilities, TV, hairdryer and Wi-Fi.
Next accommodation

The Hilton Garden Inn Ottawa Downtown hotel, conveniently situated in downtown Ottawa, is steps from Parliament Hill with subway transportation at the hotel's front door for easy access to many points of interest. Each guest room features a desk, 47-inch HDTV with premium channels and oversized windows flood the room with sunlight. WiFi is free, and there is a mini-refrigerator, microwave and coffeemaker for your convenience. Additional features include a complimentary fitness center, heated indoor pool & evening room service.
Next accommodation

Hyatt Place Montréal Downtown is located near the renowned Village, one of Montréal’s most diverse and colourful neighbourhoods. You’ll also be close to the Quartier des spectacles, where you’ll find numerous cafés, shops and restaurants. With the largest metro station in Montréal connected to the hotel, you can take advantage of easy access to many attractions. Amenities include; free Wi-Fi, fitness centre, pool and onsite restaurant
Next accommodation

Located in North Conway, a short drive from Mount Washington, the Hampton Inn & Suites is a resort style hotel. Facilities include an indoor pool, fitness centre and breakfast room. There is complimentary Wi-Fi throughout the hotel.
Next accommodation 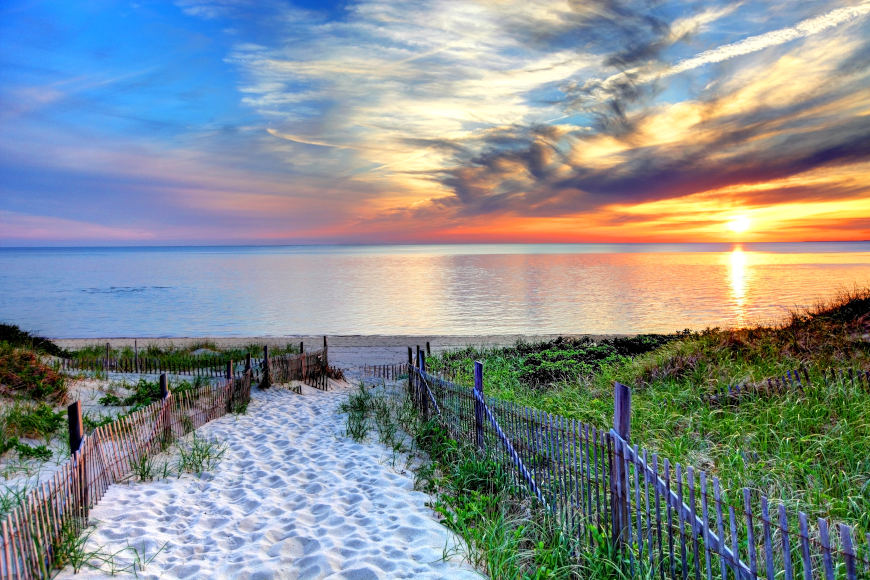 Join our exciting tour to beautiful Cape Cod. Renowned for its up-market coastal resorts, Cape Cod's shores are a playground for the rich & famous. Including visits to Plymouth, where America’s founding fathers first set foot in the New World.

Join our exciting tour to beautiful Cape Cod. Renowned for its up-market coastal resorts, Cape Cod's shores are a playground for the rich & famous. Including visits to Plymouth...