A Journey Through the Baltics

​​Explore the highlights of Lithuania, Latvia and Estonia on this fabulous journey through the Baltics. Discover historic cities and ancient castles, stunning scenery and a majestic Baroque palace. ​ 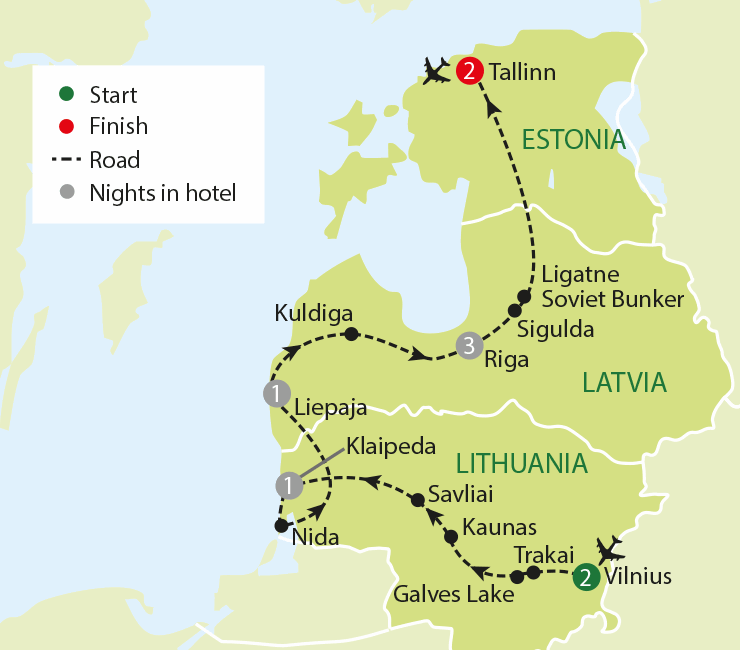 Fly to Vilnius in Lithuania, via Frankfurt. On arrival, we'll transfer to our hotel and get to know one another better over a welcome drink before a  traditional Lithuanian dinner.

Lithuania's capital Vilnius, is a charming and beautiful city and we'll see its highlights on a sightseeing tour today. The UNESCO-listed Old Town is home to a maze of narrow streets and a wealth of historic buildings. We'll pass Vilnius Cathedral that lies at the city centre, as well as St Anna's Church – a Gothic masterpiece, St Peter and Paul's Church and the ruins of the Upper and Lower Castle.

Next we'll stop at Trakai, the former capital of Lithuania. We'll enjoy a sightseeing tour and visit the castle, a 14th century fortress which sits on an island connected to the shore by a footbridge.

This morning we'll travel to Sauliai and visit the remarkable Hill of Crosses, a pilgrimage site where hundreds of crosses are planted as memorials and in devotion to Christianity.

Our journey continues to Klaipėda, the main seaport of Lithuania. It boasts a harmonious mix of old and new buildings, and a city tour will introduce us to highlights including the Old Town and the neo-classical Drama Theatre. We'll stay in Klaipėda overnight.

Today's included excursion will begin with a sightseeing tour of the National Park of the Curonian Spit, a 98 kilometre stretch of sand washed by the Baltic Sea to the west, and the Curonian Lagoon to the east. We'll see spectacular sand dunes and visit the small fishing village of Nida.

Next, we'll attend an amber workshop where we'll learn about the history of Baltic amber and see ancient and modern processing tools. As our journey continues we'll cross the border into Latvia and continue on to Liepāja.

After breakfast, join your Tour Manager on a city tour of Liepāja, Latvia's third largest city. We'll begin with a short walk around the city centre and then visit the naval port – Karosta – which occupies about a third of the city's area. During the Soviet era, this area was a closed territory, but today visitors are welcome to visit the St Nicholas Orthodox Maritime Cathedral and see the prison and punishment cells at Karosta Prison, built at the beginning of the 20th century. We'll depart Liepāja and drive to Kuldīga. Considered to be one of the most beautiful towns in Latvia, it boasts one of the longest brick bridges in Europe. There's also a medieval centre with well-preserved 17th and 18th century buildings set around the Alekšupīte River. We'll visit the Venta Rapid, the widest waterfall in Europe, before continuing onto the Latvian capital Riga where we'll stay for three nights.

Enjoy a morning tour of the medieval town of Riga, including sites such as Riga castle, Dome Cathedral which boasts one of the world's larest pipe organs and the gol guidl houses. At the Cathedral we'll enjoy an organ music concert.

Later, we visit the impressive central market, the largest in Europe, which is hosted in hangars abandoned by the German army. There are different pavillions, each which different foods. After the visit, we'll have a light lunch by tasting different specialities including a variety of marinated vegetables, smoked fish and meat.

After breakfast, we'll head to Rundale Palace, which is considered by many to be the most magnificent piece of Baroque architecture in the Baltic states. It was built as a summer residence for the Duke of Courland Ernst Johann von Biron in the first part of the 18th century and has been restored after suffering extensive damage during the two world wars. You'll have plenty of time to explore inside the palace. Outside, why not take a stroll through the beautiful French-style park surrounded by a canal. This afternoon we will head back to Riga to go for dinner in a local restaurant, but before then, we learn about the famous Black Balsam and taste three varieties.

​The modern history of the bar 'Riga Black Magic' intertwines with the history of 'Riga Black Balsam' and its creator, Abraham Kunze, whose extract of healing herbs gained popularity among townsfolk and was considered to be the panacea for all diseases. It may be that the ancient apothecary, where Abraham Kunze developed the secret elixir, was situated here in the basement. It might be that the confectionary filled with “Riga Black Balsam” could be purchased here a long time ago.

The dark and astringent liqueur, made of 24 herbs, remains unchanged for 250 years. The balsam is good for drinking on its own or in​ hot drinks and cocktails, and it brings a special flavour to chocolate products and desserts. Locals drink balsam with coffee in winter to fend of chills, and in summer they pour it over ice-cream.

Our journey continues after breakfast when we head to Tallinn in Estonia. On the way we'll stop at the Līgatne Soviet Bunker. Built nine metres below ground during the Cold War, it was intended to be a secret hiding place for elite members of the Communist Party in the event of a nuclear war. Our next stop is at Turaida Museum Reserve, an area rich in monuments of historical interest. Visit the church and the delightful Folk Song Garden, before we head to the picturesque town of Sigulda, situated in the Gauja National Park. On arrival in Tallinn, we'll check in to our hotel for a two-night stay.

Tallinn is a picturesque old city, where whole districts date back to the Middle Ages. On today's city tour we'll explore the Old Town with its quaint narrow streets and gothic-styled merchants' houses, see Toompea Castle and the Russian Orthodox Cathedral of Alexander Nevsky, as well as the 15th century Town Hall.

This evening, we'll gather as a group and enjoy a farewell dinner in a medieval restaurant in Tallinn, Olde Hansa. This authentic restaurant boasts a traditional interior and staff dress up in traditional dress - this is as close as you'll get to going back in time! Enjoy a host of medieval dishes made from freshly-sourced produce and with traditional herbs and spices that came to Estonian by way of the Hanseatic League's trade routes from the far east.

After breakfast, we'll transfer to the airport in Tallinn for our flight back to the UK, via Frankfurt.

Situated right in the center of Vilnius and just 15 minutes from the airport, this hotel is surrounded by many attractions, including the medieval town, Litexpo fairground and the Congress Centre. The hotel features a delicious buffet breakfast, a contemporary a la carte restaurant which is open all day, a terrace bar and a 24 hour shop for refreshments. All rooms include HDTV, mini fridge, coffee-maker and complimentary wifi and all guests have access to the fitness centre.
Next accommodation

Located in the heart of the city in the old town, the National Hotel is just steps away from Anike Square and the Old Ferry Terminal. The hotel was first established in 1855 but was unfortunatey destroyed by the largest fire in Klaipeda until 2011 when it was finally reconstructed and became the National Hotel. The hotel features a buffet breakfast served in the cosy bar, restaurant, the 'fat cat' bar, laundry and room service (surcharage applies). All rooms are equiped with free wifi, air conditioning, spacious bathrooms with heated floors and a mini bar.
Next accommodation

Promenade Hotel is a elegant 5 star Hotel overlooking the harbour promenade in the centre of Liepaja. Each room is special with it's own individual design and cosy atmosphere.Hotel facilities include a restaurant and lobby bar. All bedrooms include private facilities, air conditioning, mini bar, free WiFi access and cable TV.
Next accommodation

Awarded 'Estonia's Leading Hotel 2019' the Palace Hotel is thought to be one of the most exciting, glamorous and spectacular buildings of its time. The hotel features a buffet breakfast, concierge, swimming pool and fitness center, classic Estonian restaurant, bar and bakery. All the rooms are modern and have LED lighting, air conditioning, TV, mini bar safe and bath supplies.